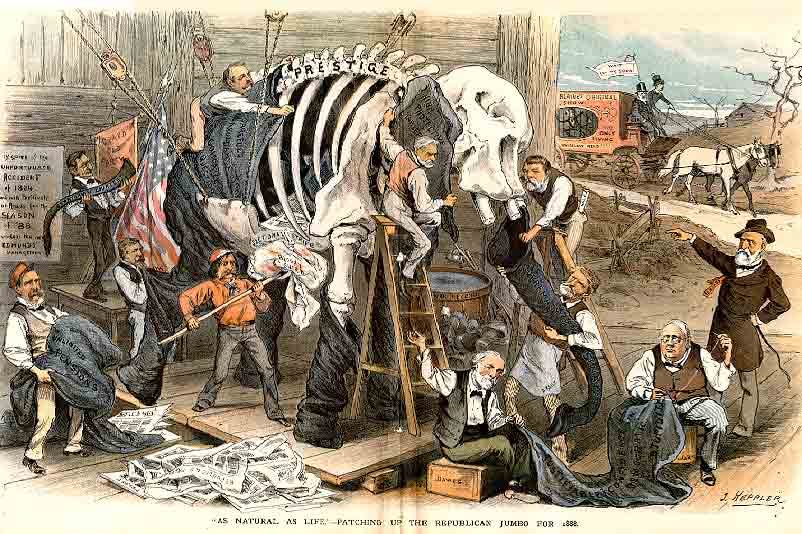 Stitching together an elephant to cover the old fossil bones.

I love the rough log cabin,
It tells of olden time
When a hardy and an honest class
Of freemen in their prime,
First left their father’s peaceful home
Where all was joy and rest,
With their axes on their shoulders
And sallied for the West.

Of logs they built a sturdy pile,
With slabs they roofed it o’er ;
With wooden latch and hinges rude,
They hung the clumsy door,
And for the little window lights
In size of two feet by two,
They used such sash as could be got
In regions that were new.

The chimney was composed of slats
Well interlaid with clay,
And stood a sight we seldom see
In this a later day;
And there on stones for fire-dogs
A rousing fire was made,
While round it sat a hardy crew
With none to make afraid.

I love the old Log Cabin,
For there in early days
Long lived the honest Harrison,
Of rough but noble ways,
The people made him President, –
And they will do the same
This year with him who justly shares
His grandsire’s name and fame.

Of more interest is the tune: Rambling Wreck.   “Rambling Wreck” is generally credited to Charles Ives in 1895.  This songbook proves beyond the shadow of a doubt that it was around at least seven years earlier.

This entry was posted in Huzzah!, politics and tagged 1888, Republicans, songs. Bookmark the permalink.

1 Response to The Dead Elephant